Werewolves are also known as Lycanthropes. In New Orleans that have been named Loup Garou. The werewolf population has suffered greatly from genocide. Vampires slaughtered them in large numbers since they felt threatened by them pushing the race to the brink of extinction. Werewolves are well known for their ability to take the form of a savage wolf during full moons. Even within human form, werewolves have been known to accomplish feats of great strength and agility.

A werewolf has to be born into a family that carries the werewolf gene. Then in order to trigger their inherited werewolf gene, whether accidentally or intentionally. After the gene is triggered their powers will manifest and during the next full moon they will experience their first transformation into wolf form.

There is controversy surrounding the origin of werewolves but what is known for certain is that they pre-date the creation of the vampire race.

Werewolves resided in villages within the "New World". Eventually Mikael and Esther took refuge in the New World, to escape a plague that caused the couple to lose their child. After, Mikael's and Esther's settling down they began to raise a new family. They gave birth to five sons Henrik, Elijah, Finn, Kol, Niklaus, and also one daughter, Rebekah. Unfortunately, Henrik and Niklaus curiously went to watch the werewolves transform one night. Henrik was slain by the werewolves. Mikael pleaded with Esther to use her witch abilities to defend their family from the werewolves. So, Esther utilized her magic to grant immortality (among other abilities) and turned Mikael, Elijah, Finn, Kol, Niklaus,and Rebekah into the original vampires.

Eventually, the Original family's desire for blood to sate their thirst led them to feast on residents of their village. Although, when Niklaus feasted and making his first human kill he triggered his dormant werewolf gene. This incident made a prior affair of Esther's with a werewolf villager, known. Niklaus was revealed to be the original hybrid having both werewolf and vampire abilities. Mikael, filled with rage at Esther's affair, ravaged the village murdering Niklaus' biological father and many villagers. This act of vengeance committed by Mikael declared the war that has endured many years between both vampires and werewolves.

In NightFall it's revealed that are other types of shapeshifters. 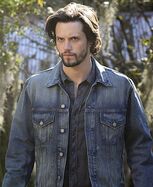 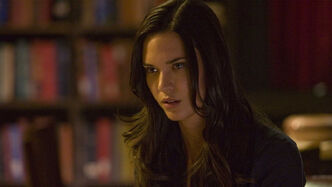 Eileen Remis
Add a photo to this gallery
Retrieved from "https://the-originals-fanfiction.fandom.com/wiki/Werewolf?oldid=23018"
Community content is available under CC-BY-SA unless otherwise noted.