Jay Sykes will be a recurring character and a new love interest for Aria in Season Two. He is currently a college student (sophomore) at the University of New Orleans.

Jay originally lived in Gloucester, England then moved to U.S. and now lives in New Orleans.

He loves to drink tea and go to the movies. He is a very fun person to be around. But he can get angry at sometimes.

He has dark brown hair with light brown highlights. His eyes are green/blue color. He wears very casual clothes. He loves to wear chains and hats. He wears button up shirts and sweaters.

Jay will meet Aria on her first day of college.

Sophia Mikaelson He and Sophia are really good friends. 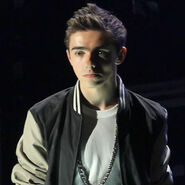 Retrieved from "https://the-originals-fanfiction.fandom.com/wiki/Jay_Sykes?oldid=13080"
Community content is available under CC-BY-SA unless otherwise noted.