Finna (a.k.a Fin) is Sophia's dog. Finna becomes very attached to Sophia when she adopts him in At Least With Sorrow. Even though Sophia is a vampire, Finna barks at anyone who is mean to her and attacks anyone who tries to hurt her. Finna was one of the gifts given to Sophia by Katherine.

In At Least With Sorrow, Finna is adopted by Sophia as a gift from Katherine. At night, a emotional Sophia comes home, Finna is trying to make her feel better but has no luck.

In Eclipse of the Heart, Finna moves in with Sophia to her new home.

In Rise from the Grave,

Sophia will take Finna with her to Tokyo, Japan. 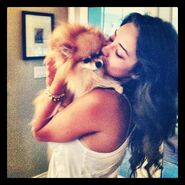 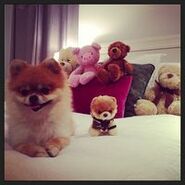 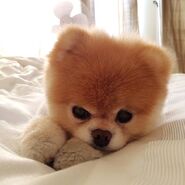 Finna as a baby
Add a photo to this gallery

Retrieved from "https://the-originals-fanfiction.fandom.com/wiki/Finna?oldid=13068"
Community content is available under CC-BY-SA unless otherwise noted.