The relationship between Danielle Mikaelson and Leon Dominic is one of the most important relationships within the series. Leon was first brought up on a list of bodyguards picked out for Danielle and Davina was the first one to suggest Leon be Danielle's chosen bodyguard and others came to agree with her, however, Danielle was against the idea of it. After Leon was hired, he joined with Danielle and Davina on their trip of travels to different locations so that he could do his job causing more to Danielle's annoyance. Five months later, they returned to New Orleans and soon found trouble as the resurrected Mikael killed Leon, devastating Danielle. When revealed by Elijah that Leon was becoming a vampire, his choice affected Danielle even more as she believed she was the cause of his death.

Throughout The Originals Fanfiction

After a long vacation, Danielle and Leon along with Davina return to New Orleans in Starting Over. She continues to be annoyed by his presence due to not wanting a bodyguard however Davina thinks Leon will be good for Danielle. While being escorted into the city by Leon, Danielle and Davina head into the record store and soon find trouble with the werewolves. As Danielle manages to handle things, she is almost attacked by Oliver but is saved by Leon in time. Davina questions Leon to why he didn't come in sooner and he replies that he knew what Danielle was capable of and decided to cut her a break but only for that one time and let him do his job of protecting her. That night, he saves her and Davina from the werewolves and eventually, Mikael makes his appearance and kills Leon. Danielle devastated by Leon's death, suddenly becomes a different person filled with rage and Elijah manages to snap her out of it. Mikael escapes and Elijah assures her that Leon will be alright and she realizes that Leon has vampire blood in his system. After some time, Leon wakes up and Danielle is angry with him for making that kind of decision. Leon states that is was his choice to make as he would do anything to keep her safe, even putting his own life on the line for her. They continue to argue with each other, until he learns from her that she blames herself for his death. He tells her to get used to having a bodyguard because he's not going anywhere and he won't die. She pulls him into an dark alleyway and gets him to feed off of her as she will only agree to trust him and believe that he won't die is if he will feed off of her. They come to an agreement and Leon starts to feed from her.

Leon and Danielle appear in a flashback from their travels in The Voodoo. They met Damien and he managed to compel Leon, who was on vervain, to go to the bar while he had a chat with Danielle. After she learns that Damien is her mother's older brother and finds out more her mother's family heritage but is soon forgotten after he gives her a vial of his blood and compels her to force down Sophia's throat by whatever means necessary then makes her forget him and that the conversation ever happened and to remember his orders.

Leon's transition causes Danielle to remember her life as a vampire in Mother and Son. Leon and Danielle see each while he is having his morning run. She informs him that Esther has also returned from the dead and has invited her as well as her uncles to the family dinner so she doesn't want him around for the night. He begins to refuse but she is able to get him to agree when she becomes his mentor for his vampirism. He then asks her what was it like for her as a vampire and she tells him that it was very clear for her.

Later, they are on top of a tall building beginning his first step as a vampire. She tells him that he is going to jump off the building. She wants him to embrace his life as a vampire and to see all the new possibilities that come with it. See the world that he wasn't able to see as a human and combine with the new life that he has now. Leon starts to make fun of Danielle and then uses his vamp speeds to carry her in his arms. She demands that he put her down but he will only jump off the building if she does too. He doesn't listen and jumps off the building. Leon smiles as Danielle screams and he lands on his feet to the ground after falling from such a great distance. After their bickering at each other, she calms down and he puts her down but only to receieve a slap from her. She tells him to never do that again and he tells her that she needs to loosen up as she does not need to keep her guard up twenty-four seven. She reminds him of her death and a demon taking over her body that happened months ago. Leon questions Danielle if she thinks that he can't protect her and she tells him that she doesn't want to wind up dead again. Her guard stays up regardless of where she is and reminds him of the wolves that attacked her and Davina a week ago. She then leaves.

As the family dinner begins, Leon shows up and she questions him to why he is there. He tells her that he received an invitation and it is revealed that her Uncle Finn invited him. During the family dinner, things start to get chaotic and out of control. Danielle finds out she has an older twin sister which her mother kept secret from her a thousand years. Esther shows up and the family feud continues. After many angrily accusations are thrown at each other, Esther swaps bodies and it's revealed that Danielle had a backup plan of her own. Danielle, Leon, Elijah and Klaus head over to Lenore's shop and find that Esther is Lenore's body. Danielle reveals that she planned all along for Esther to go into Lenore's body if she did decided to do a body swap. Danielle has had enough of Esther's plots and what she believes that she is doing best for the family as well as trying to take over the witches. Until Esther backs down, it will be war. Leon shields Danielle from broken glass as Esther makes her escape. After they return to the Abattoir, Danielle tells Malia, Nathan, Elijah and Klaus of the hurt that they have caused her then leaves. Leon goes after her and they head back to the tall building they fell from. Danielle confides in him about her mother and then tells him that she wants a redo from falling off the building. She says she hopes to fall off the building again before she leaves New Orleans one day, and then the Eiffel Tower. They make each other that promise and he carries her in his arms as he takes one step to fall off the building.

In Welcome to the Party, Danielle intercepts a call between Leon and Elijah by snapping Leon's neck and using a voice-changing spell to imitate her bodyguard. She prepares to leave, but is stopped by Malia, who helps her carry the unconscious Leon onto the couch. Danielle tells Malia that Leon will be fine, but he will likely be angry at her. Sometime after Dani arrives at the University of New Orleans, Leon meets up with her, confronting her about snapping his neck. He is able to calm her down, but Aria stops either of them from confronting Cascadia. As Sophia returns to see her daughter, the compulsion enacted by Damien begins working, and in the process, Danielle snaps Leon's neck a second time.

As he calms her down, they arrive at his apartment.

In Going Back into the Past, after helping Sophia with Elijah, Leon promises her that he will continue to look after Danielle.

Throughout Call of Magic

Their relationship at times is not easy. Most times, they constantly bicker at each other and Danielle is annoyed most of the time due to his job as her bodyguard. However, they do care about one another and want for the other to always be safe. Leon constantly make decisions that Danielle's is highly against but he only does it to protect her, willing to put his life on the line for her. As Danielle taught Leon about his vampirism, it would make her reflect on her life when she was still a vampire and feels that she and him are similar in some ways. At times, you can definitely sense the chemistry and sexual tension between them. 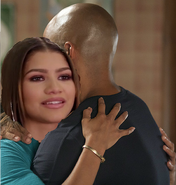 Retrieved from "https://the-originals-fanfiction.fandom.com/wiki/Danielle_and_Leon?oldid=22931"
Community content is available under CC-BY-SA unless otherwise noted.