The special friendship between Cecilia and Eileen Remis. Eileen and Cecilia grew up together during the Ancient Times and have always had a very special bond.

After two-thousand years, Cecilia and Eileen were reunited in The Voodoo. During Brody's class, Eileen volunteered to help him with the lecture of the ancient witch, Cecilia. While speaking, she looks over to Sophia a few times which causes Sophia to have a familiar feeling about her. After class ended, Sophia decides to follow Magdalene but stops when she walks past Eileen whom smiles at her continuing Sophia's familiar feeling about her but not knowing what it is. By the end of the episode, Sophia begins to remember who Eileen really is.

In Welcome to the Party,

Sophia and Eileen spend the day together in Paranormal Activity. 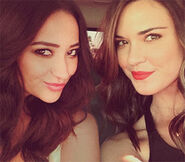 Retrieved from "https://the-originals-fanfiction.fandom.com/wiki/Cecilia_and_Eileen?oldid=24401"
Community content is available under CC-BY-SA unless otherwise noted.